Before moving to Auburn, I had never heard anything about The Miracle League. I signed Jacob up last year and was reluctant to do so because he has no interest in sports whatsoever. We went to his first game not really knowing what to expect. I was a little nervous, a little apprehensive and a lot anxious. Even when the event is for special needs kids I still worry about Jacob, his reaction to the event and other's reactions towards him. I guess this will always be the case with him. I'm slowly learning not to care what other's think. However, I was still nervous.

When we got to the field I couldn't help but be overwhelmed with emotions. There were people who had gone down the same special needs path that Erick and I had had, sitting in the stands and cheering for, not only their kids, but for everyone else's kid. It was like a big celebration. There were coaches who were so patient with the kids that swung at the ball 15 times and still had not hit the ball. There were buddies for every kid to help guide them, have fun with them and cheer them on. But most of all, there were kids, that by other's standards would never play ball, out on the field having a blast and enjoying every moment that they had in the spotlight. It was an amazing sight to see. 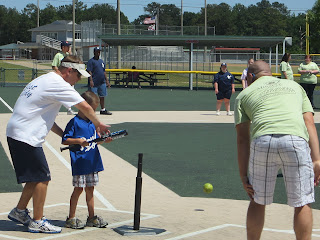 The picture above is a picture from last year's season. Jacob was not into it at all and he needed help with everything about hitting the ball and some of the time didn't even pay attention to what was going on. (mainly because he has no interest in sports)
With each game last year I continued to feel overwhelming emotions at every one of the games. I can't even describe the joy that comes from watching these kids playing America's favorite pastime. I think what got me the most was seeing the buddies push the kids that were in wheelchairs around the bases and the crowd cheering abundantly for that child when they got to home plate and "scored."

This year I decided that I was going to go to the game and not get so emotional since I knew what to expect. I thought for sure that the new had worn off and it wouldn't be so heart warming this year. NOPE!!! I got there and immediately felt that same over flow of emotions, especially when my boy got up to bat! He got up there like a pro and hit the ball all by himself!!!! 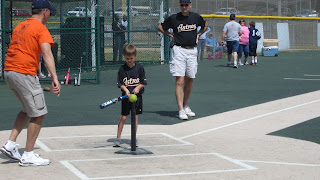 The entire crowd cheered Jacob on as he "ran" (I really mean walked, very slowly) around the bases. He's still not that into it but he at least was excited to hit the ball. Every year brings more and more improvements with Jacob and I'm excited to see what this ball season holds for him.

Then, my dear sweet Caleb, cried so hard and so long about wanting to go onto the field that Jacob's coach asked if he wanted to hang with him in the outfield. I don't even think Caleb even answered before he was halfway to midfield. He did everything that coach Randy did and he was very observant on what to do next. Coach Randy started clapping for the kid that was hitting and Caleb followed suit. 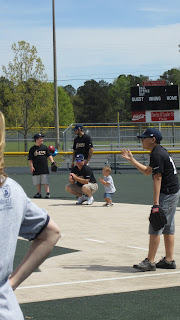 To most people this is probably cute because it's a two year old, just being a two year old. But, as I watched Caleb I saw a sweet little boy growing up to be an encourager. I prayed at that moment that he will continue to have a heart for the kids that are "different" than him. I prayed that he will be a rock for Jacob and that he will continue to be Jacob's biggest fan. I love that Caleb has the opportunity to see other's loving on these kids!! I'm so happy to have a bold little man on our team.  One Bible verse comes to mind when I think about what I want Caleb to learn from having a brother with autism. It's talking about the body of Christ and it's found in 1 Corinthians 12:22

"In fact, some parts of the body
that seem weakest and least important
are actually the most necessary."