It's always hard to have both boys at home all day. The mixture of the burdens of autism and typical two's are a disaster waiting to happen. Today was no different except that we had to have some groceries. I reluctantly got everyone dressed and ready to go. The boys seemed excited to be going to the store and I was wishing that I had their enthusiasm. So we loaded up and off we went. I know that this sounds silly to most parents but if you have a special needs child you will understand my next sentence. I texted a really good friend of mine and the text said this "please pray for me, I'm about to go into the grocery store with both boys."
We entered the store and were doing very well and with every step I anticipated what I thought was the inevitable. I just knew that Jacob would have a meltdown at some point so I was on guard. Boy was I wrong. Jacob was such a big helper. He walked with me, we talked about what we were looking for and he helped push the buggy. In fact, he was so good that I stopped and took a picture so I could remember this day. 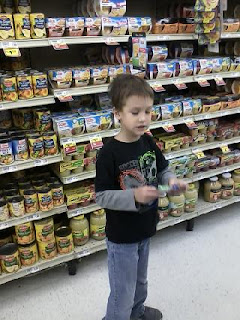 Just one year ago a trip like this to the grocery store would've been a nightmare. I avoided it with every fiber of my being. However, my boy has grown and he has progressed so much. There was one time in the store that I thought, "is this how it feels to have two typical kids?" (Please don't think that they were not disciplined at some point in the store because they were).
It felt so good to walk through the store without a care in the world. I was free!! No one in there would've known that Jacob was socially hindered by autism and that made me feel good. For the first time ever, no one stared at us with horrible looks on their faces and they weren't whispering to each other about how I wasn't a good mom. It was nice, to say the least. Nice? I meant extraordinary!! 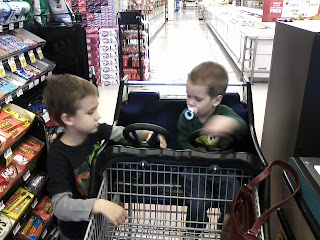