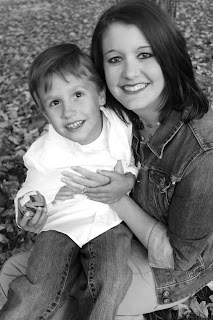 Over the past year God has been slowly opening my eyes to the fact that Jacob has been His way of showing mercy to me. I used to blame God when we first found out that Jacob had special needs. I was angry because I had done everything "right" according to what everyone had taught me. I was an obedient child, I was a good friend, I knew Bible verses and I had lead people to Christ and I saved myself for marriage. According to the "christian" standards, I was a pretty good person. So why did God do this to me?

I struggled a long time with this question. I begged God to show me what I had done wrong, where had I sinned so bad that he would give me this burden. I also begged God to heal Jacob so that I wouldn't have to endure such hardships. That indeed was not His answer.
Over the coarse of the past few years God has shown me that this was his way of showing his love and mercy. Were it not for Jacob, I would never lean on God as much. I would never seek his face as often as I do. Because before Jacob, I had it all under control and there wasn't a daily need for God. Now, I fall on my face so often. I like to think of Jacob as a love letter from God. This is how God has shown me how close he wants me to him. He longs for me to lean on him and trust in him. This is something I never would've learned if things had gone MY way. If things had gone my way I probably would have a mediocre marriage and 2 kids who would attend church like they were supposed to and follow right along in my footsteps thinking that they were good because they learned some scripture and obeyed their parents.
I used to hide my struggles as if they were sin. When all this time sharing my struggles is how I become free. My struggles are what show me my intense need for God. My struggles are what strengthens me as a wife, mom and friend. The great thing about special needs is that it's God's way of continually keeping my life close to Him. I cannot do this without Him and I thank Him for that.
Posted by Unknown at 7:27 AM