I didn't use to drink coffee.

I use to sleep good every night.

But then again, I didn't use to be a mom to autism.

Last night we had some wonderful friends over that we haven't seen in a few years. Now, I normally am a strict mama about bedtimes, but we were having a fun time visiting so the boys got to stay up and play. The boys finally settled down around 10:45 (2 hours and 45 minutes past their normal bedtime). Erick and I fell asleep like 2 seconds after them.

Around 1:30 I was awoken by Erick and Jacob standing in our room and Erick whispering to me that Jacob had thrown up in his bed. This isn't a new thing. There have been many, many times that he has done this with no explanation, leaving Erick and I scratching our heads as to why it happened. We cleaned Jacob and his bed up, all the while he was being such a sweet little boy. We all settled down a good 30 minutes later...or so we thought. About 5 minutes after laying down in bed, we heard his heavy little footsteps stomping down the stairs. Let me just say, that when Jacob gets woken up in the middle of the night, he has a hard time going back to sleep. Erick coaxed him back in bed and this time it was a success. But just a few short minutes later, we heard the other little sleep depriver crack open his door and say "I want someone to sleep with me!" At this moment I was about to scream "ARE YOU KIDDING ME!!!" I politely told him "no" and told him I would turn his lamp on for him. He took me up on that offer and back we all went to our rooms. I didn't sleep worth a lick after all the commotion,

My alarm never wakes me up in the morning. Not because I'm a heavy sleeper, but because my 52 lb. led foot that lives in my house wakes me up by stomping down the stairs, way earlier than I anticipated with the setting of my alarm clock. However, this morning, my alarm clock woke me up. Then the snooze woke me up, and then the snooze woke me up again. Everyone was still sound asleep. The summer school bus was to be arriving in ten minutes, but Jacob was still knocked out asleep in his bed. I know this because he wasn't rocking, which normally means that the beast is beginning to stir. I made the calculated decision to let him sleep and tell the bus drivers he would not be riding with them today.

I jumped back in bed to catch a few more minutes of rest. Erick was scurrying around getting ready for work as a thought came to my mind..."I have no caramel macchiato creamer left!!" You know those moments when you know you have one chance to get something right. This was that moment for me. I jumped up, got dressed and headed for the door in search for my sanity, aka coffee creamer...cause let me just tell you, it's all about the creamer. Caleb has already gotten up at this point and we are being extremely quite, tip toeing around so that Jacob can get some rest, because if he wakes up, he's NOT going back to sleep. I'm headed to the front door, holding tightly to my keys as not to make any noise. I open the front door quietly and with no warning, like it has never done before..in the ENTIRE 4 years that we've lived in this house, the smoke alarm goes off...RIGHT OUTSIDE of Jacob's bedroom door. I ran as fast as my 30 year old legs could run up the stairs and start jumping up in down in hopes that in one of those jumps my finger would hit the silent button. I continue doing this as if Jacob miraculously didn't ear it. I finally manage to turn it off...or so I thought...and in the quietness of the moment I could hear Jacob softly through his bedroom door mocking the sound of the smoke alarm, "beep, beep, beep...beep, beep, beep. It was done, it was over.

I walked out to my car, still desperately trying to make it to the store to get my Heaven in a bottle. I opened my car door and to my surprise, Caleb's booster seat is sitting in the driver seat. It immediately made me think of Jessie, my sweet short friend from high school. I teased her about needing a booster seat to drive her car when she turned 16. Then, I remembered last night, while we were eating dinner with our friends, my car horn going off. It was obviously not my car alarm going off but it was the sweet chubby hands of my four year old we like to call Rambo. It was the memory of my car alarm that made me realize why that booster seat was sitting there.

As I was running through the grocery store, hurrying to get back so that Erick could leave for work, I realized that life is just plain crazy sometimes. It's crazy with kids, it's crazier with boys and even crazier with autism. I remember a time when each of my days felt like I was just racing around trying to keep my head above water and looking for something to just make it better. Whether it be caramel macchiato creamer, retail therapy or facebook. These crazy days are becoming fewer and farther between and I'm thankful for that.

I returned home to both of my boys playing and giggling together in the living room. We then were able to sit down together to eat some bacon and eggs, a rarity at our house to eat breakfast together. Even though we were talking about poots, butts and burps, I was thankful for that moment. Without the chaos of the morning, that moment wouldn't have been as sweet.

So Things have changed...

I love to drink coffee.

I can sleep when I'm dead.

I am a mom to Autism and Rambo.

Life can be crazy but at least it's not boring!! 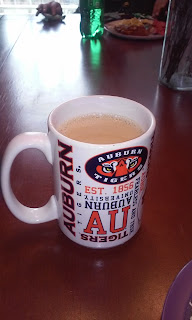